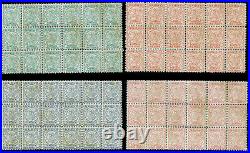 For sale are: Four sheets (each sheet includes 3×6 stamps) in Orange color (one penny), Dark green (two pence), Rose red (nine pence) and Blue (one shilling). Beautiful and rare set of Samarkand depicting mythological Simurgh. Paper is yellowish gray, has blemishes of age, is non gummed. Samarkand also known as Samarqand, is a city in southeastern Uzbekistan and among the oldest continuously inhabited cities in Central Asia. There is evidence of human activity in the area of the city from the late Paleolithic Era, though there is no direct evidence of when Samarkand was founded; several theories propose that it was founded between the 8th and 7th centuries BCE. Prospering from its location on the Silk Road between China and Europe, at times Samarkand was one of the largest cities of Central Asia. Most of the inhabitants of this city are Persian-speaking and speak the Tajik Persian dialect. This city is one of the historical centers of the Tajik people in Central Asia. By the time of the Achaemenid Empire of Persia, it was the capital of the Sogdian satrapy. The city was conquered by Alexander the Great in 329 BCE, when it was known as Markanda, which was rendered in Greek as. The city was ruled by a succession of Iranian and Turkic rulers until it was conquered by the Mongols under Genghis Khan in 1220. Today, Samarkand is the capital of Samarqand Region and one of the largest cities of Uzbekistan. The city is noted as a centre of Islamic scholarly study and the birthplace of the Timurid Renaissance. In the 14th century, Timur (Tamerlane) made it the capital of his empire and the site of his mausoleum, the Gur-e Amir. The Bibi-Khanym Mosque, rebuilt during the Soviet era, remains one of the city’s most notable landmarks. Samarkand’s Registan square was the city’s ancient centre and is bounded by three monumental religious buildings. The city has carefully preserved the traditions of ancient crafts: embroidery, goldwork, silk weaving, copper engraving, ceramics, wood carving, and wood painting. In 2001, UNESCO added the city to its World Heritage List as Samarkand Crossroads of Cultures. Modern Samarkand is divided into two parts: the old city, and the new city, which was developed during the days of the Russian Empire and Soviet Union. The old city includes historical monuments, shops, and old private houses; the new city includes administrative buildings along with cultural centres and educational institutions. Simurgh is a benevolent, mythical bird in Persian mythology and literature. It is sometimes equated with other mythological birds such as the phoenix and the hum. The figure can be found in all periods of Iranian art and literature and is also evident in the iconography of Azerbaijan, Georgia, medieval Armenia, the Eastern Roman Empire, and other regions that were within the realm of Persian cultural influence. The simurgh is depicted in Iranian art as a winged creature in the shape of a bird, gigantic enough to carry off an elephant or a whale. It appears as a peacock with the head of a dog and the claws of a lion sometimes, however, also with a human face. The simurgh is inherently benevolent and unambiguously female. Being part mammal, she suckles her young. The simurgh has teeth. It has an enmity towards snakes, and its natural habitat is a place with plenty of water. Its feathers are said to be the colour of copper, and though it was originally described as being a dog-bird, later it was shown with either the head of a man or a dog. The item “Samarkand, Simurgh, Persia RARE set of one, two, nine pence with One Shilling” is in sale since Friday, February 8, 2019. This item is in the category “Stamps\Great Britain\Victoria\Other Victoria”. The seller is “hermes_diactoros” and is located in Zagreb. This item can be shipped worldwide.